A structure contains a number of data types grouped together. These data types may or may not be of the same type. The following example illustrates the use of this data type.


And here is the output...
Enter names, prices and no. of pages of 3 books


And this is what you entered 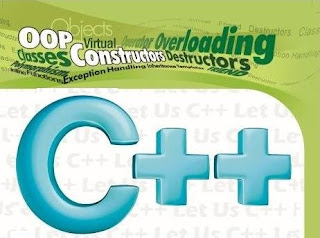 Source By Let Us C "Yashwant Kanetkar"
Posted by Unknown No comments:
Email ThisBlogThis!Share to TwitterShare to FacebookShare to Pinterest
Labels: C C(plus plus) TUTORIAL

It is possible for the functions to call themselves. A function is called ‘recursive’ if a statement within the body of a function calls the same function. Sometimes called ‘circular definition’, recursion is thus the process of defining something in terms of itself.
Let us now see a simple example of recursion. Suppose we want to calculate the factorial value of an integer. As we know, the factorial of a number is the product of all the integers between 1 and that number. For example, 4 factorial is 4 * 3 * 2 * 1.

And here is the output...


Following is the recursive version of the function to calculate the factorial value.


Now the output is

FUNCTION CALLS : Call by value and Call by reference

The output of the above program would be:


Note that values of a and b remain unchanged even after exchanging the values of x and y.

In the second method (call by reference) the addresses of actual arguments in the calling function are copied into formal arguments of the called function. This means that using these addresses we would have an access to the actual arguments and hence we would be able to manipulate them. The following program illustrates this fact.


The output of the above program would be:

Note that this program manages to exchange the values of a and b using their addresses stored in x and y.


since pBase points to object of Drive and show() is virtual in base class Base.
Posted by Unknown No comments:
Email ThisBlogThis!Share to TwitterShare to FacebookShare to Pinterest
Labels: C C(plus plus) TUTORIAL

An array is a collection of similar elements. These similar elements could be all ints, or all floats, or all chars, etc. Usually, the array of characters is called a ‘string’, whereas an array of ints or floats is called simply an array. Remember that all elements of any given array must be of the same type. i.e. we cannot have an array of 10 numbers, of which 5 are ints and 5 are floats.

Program Using Array
Let us try to write a program to find average marks obtained by a class of 30 students in a test.

The conditional operators ? and : are sometimes called ternary operators since they take three arguments. In fact, they form a kind of foreshortened if-then-else. Their general form is,

It is perfectly all right if we write an entire if-else construct within either the body of the if statement or the body of an else statement. This is called ‘nesting’of ifs. This is shown in the following program.

IF Condition in C tutorial


Posted by Unknown No comments:
Email ThisBlogThis!Share to TwitterShare to FacebookShare to Pinterest
Labels: C C(plus plus) TUTORIAL

What are pointers? tutorial

Pointers require a bit of new syntax because when you have a pointer, you need the ability to request both the memory location it stores and the value stored at that memory location. Moreover, since pointers are somewhat special, you need to tell the compiler when you declare your pointer variable that the variable is a pointer, and tell the compiler what type of memory it points to.
The pointer declaration looks like this:
<variable_type> *<name>;


For example, you could declare a pointer that stores the address of an integer with the following syntax
int *points_to_integer;

Notice the use of the *. This is the key to declaring a pointer; if you add it directly before the variable name, it will declare the variable to be a pointer. Minor gotcha: if you declare multiple pointers on the same line, you must precede each of them with an asterisk:
// one pointer, one regular int
int *pointer1, nonpointer1;
// two pointers
int *pointer1, *pointer2;

As I mentioned, there are two ways to use the pointer to access information: it is possible to have it give the actual address to another variable. To do so, simply use the name of the pointer without the *. However, to access the actual memory location, use the *. The technical name for this doing this is dereferencing the pointer; in essence, you're taking the reference to some memory address and following it, to retrieve the actual value. It can be tricky to keep track of when you should add the asterisk. Remember that the pointer's natural use is to store a memory address; so when you use the pointer:
call_to_function_expecting_memory_address(pointer);

then it evaluates to the address. You have to add something extra, the asterisk, in order to retrieve the value stored at the address. You'll probably do that an awful lot. Nevertheless, the pointer itself is supposed to store an address, so when you use the bare pointer, you get that address back.
Pointing to Something: Retrieving an Address
In order to have a pointer actually point to another variable it is necessary to have the memory address of that variable also. To get the memory address of a variable (its location in memory), put the & sign in front of the variable name. This makes it give its address. This is called the address-of operator, because it returns the memory address. Conveniently, both ampersand and address-of start with a; that's a useful way to remember that you use & to get the address of a variable.
For example:
#include <iostream>
using namespace std;
int main()
{
int x;            // A normal integer
int *p;           // A pointer to an integer
p = &x;           // Read it, "assign the address of x to p"
cin>> x;          // Put a value in x, we could also use *p here
cin.ignore();
cout<< *p <<"\n"; // Note the use of the * to get the value
cin.get();
}

The cout outputs the value stored in x. Why is that? Well, let's look at the code. The integer is called x. A pointer to an integer is then defined as p. Then it stores the memory location of x in pointer by using the address-of operator (&) to get the address of the variable. Using the ampersand is a bit like looking at the label on the safety deposit box to see its number rather than looking inside the box, to get what it stores. The user then inputs a number that is stored in the variable x; remember, this is the same location that is pointed to by p.
The next line then passes *p into cout. *p performs the "dereferencing" operation on p; it looks at the address stored in p, and goes to that address and returns the value. This is akin to looking inside a safety deposit box only to find the number of (and, presumably, the key to ) another box, which you then open.
The keyword new is used to initialize pointers with memory from free store (a section of memory available to all programs). The syntax looks like the example:
int *ptr = new int;

It initializes ptr to point to a memory address of size int (because variables have different sizes, number of bytes, this is necessary). The memory that is pointed to becomes unavailable to other programs. This means that the careful coder should free this memory at the end of its usage.
The delete operator frees up the memory allocated through new. To do so, the syntax is as in the example.
delete ptr;

After deleting a pointer, it is a good idea to reset it to point to 0. When 0 is assigned to a pointer, the pointer becomes a null pointer, in other words, it points to nothing. By doing this, when you do something foolish with the pointer (it happens a lot, even with experienced programmers), you find out immediately instead of later, when you have done considerable damage.